In 1905 an article appeared in a national newspaper which alerted the Charity Commissioners to what they believed to be the unsatisfactory management of several Biddenden Charities.

Over an 18 month period the Commissioners worked with the trustees of the Biddenden Parochial Charities and Biddenden Parish Council to set up a new scheme, the Biddenden Consolidated Charities (8th March 1907) on the agreement it would contribute up to £500 of its surplus funds to build a Club House through a new organisation, the Parish Club House Charity (set up on 6th January 1908), now called the Village Halls and Sports Committee (Registered Charity 302684). 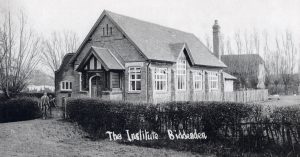 The Parish Club House was duly built on land donated by Mr Tylden-Pattenson of Dashmonden, and inaugurated in 1910. The building originally consisted of a Hall, Billiard Room, Card Room and Rifle Range. Ladies were only allowed to use the rooms on two afternoons a week. 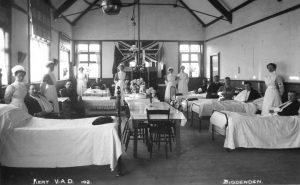 Original hall used as a hospital during WWI, from ‘Biddenden in Pictures’ courtesy of Biddenden Local History Society

During the 1914-18 war it was used as a ten bed hospital for convalescing Belgian soldiers with local ladies working as volunteer nurses.

In the 1950s 26 different organisations were holding meetings and activities in the hall – and it was clear the facilities needed to be expanded.

In 1962 plans were developed and an appeal to raise £24,000 for a new hall was launched. Funds were raised through ‘Village Spectaculars’ (held for eight consecutive years between 1969 and 1976, the funds raised first paying off the balance of loans from renovating the Village Hall, with the balance going towards the Squash Courts and Changing Rooms at the Gordon Jones Field) as well as general donations, and loans and grants from Tenterden Rural District Council and the Parish Council. 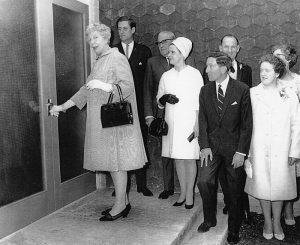 Building work started and the new facilities were completed and ready for opening by Dame Edith Evans in 1968 (a famous actress, best remembered for playing Lady Bracknell in The Importance of Being Earnest, who lived at Washenden, and a generous donor to the project). The old building was largely kept intact, and a new extension added to the rear comprising a large hall, a new kitchen and toilets and lengthening of the Rifle Range. 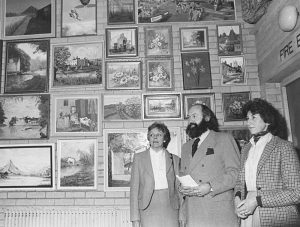 Fundraising continued in the 1970s to pay off loans for the New Hall and for further sports facilities. A major annual event was the ‘Art and Needlework Exhibition’ which ran for over forty years and raised a huge amount of money for the Halls and for other village groups.

Once the New Hall loans had been paid off attention turned to developing the Gordon Jones Field, where more land was purchased by the Parish Council. Changing Rooms and Squash Courts were opened in 1974, followed by the Tennis Courts in 1982 and the Bowls Green in 1989. These facilities are all on land leased by the Village Halls and Sports Committee from Biddenden Parish Council. The Clubs rent the premises, and the rents are used to maintain the facilities.

The main challenge today is to keep all the facilities managed by the Charity in good condition – and we are most grateful for the support we get from the Tractorfest and other local organisations and individuals, as well as grant giving bodies such as Biddenden Parish Council, Ashford Borough Council, and Kent County Council.